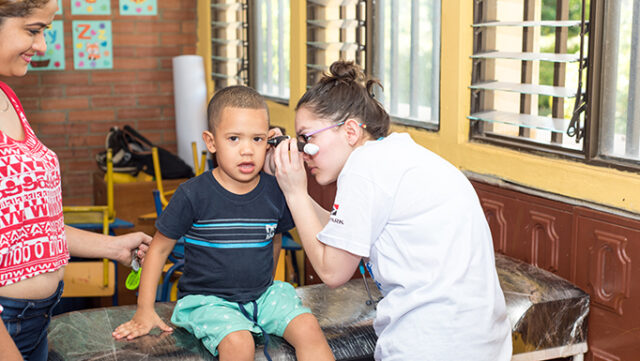 Committed to the well-being and promotion of health in the area of influence of its operation, the company supported the recent brigade of the Colombian Civil Air Patrol in Casanare.

Villanueva, Casanare – The Colombian Civil Air Patrol (PAC) visited Villanueva in the south of Casanare department on Friday 4 and Saturday 5 October to bring well-being to over 900 residents who had free of charge medical consultations in pediatrics, dermatology, optometry and ophthalmology, as well as ultrasound for pregnant women, surgery and family planning.

The event was made possible by a partnership between the Villanueva Mayor’s Office, RedSalud, PAC and GeoPark, and is part of GeoPark’s commitment to promoting the well-being of its neighbors in areas of operations. “At GeoPark we are very happy to be able to support once again this health event where our most vulnerable neighbors have access to consultations and minor surgeries, which apart from ensuring a fundamental right can change their quality of life,” said Luisa Vargas, GeoPark Social Responsibility manager.

The director of the Colombian Civil Air Patrol, Pamela Estrada, highlighted the commitment of health professionals and volunteer pilots who for 50 years have brought well-being to the most vulnerable sectors of the country’s population.

Mayor Ruth Yaneth Bohorquez of Villanueva thanked the support of GeoPark and PAC in providing health services to the community, while highlighting the work and willingness of the more than 30 volunteers who joined the initiative.

ABOUT GEOPARK
GeoPark is a leading independent Latin American oil and gas explorer, operator and consolidator with operations and growth platforms in Colombia, Peru, Argentina, Brazil, Chile and Ecuador. As part of its mission to “Create Value and Give Back” the company develops sustainable social investment programs in conjunction with the State and local authorities and communities, which aim to promote positive changes in the areas in which it has activities. GeoPark is listed on the New York Stock Exchange (NYSE). In Colombia it started activities as an operator in 2012 and is now the second largest private oil operator in the country.