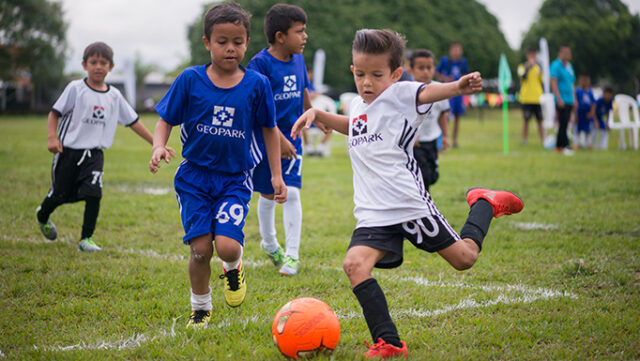 Bogotá, Colombia – This weekend was the commemoration of the first year of the Fundacion Colombia Somos Todos James Rodriguez program, which GeoPark supports and in which 200 boys, girls and young people from Tauramena and Villanueva municipalities in Casanare take part. In soccer tournaments held in both municipalities, the children, their parents, and representatives of the Company and the Foundation spent time together and scored goals while remembering the highlights of this first year.

The program that took shape in the second half of 2018 thanks to a partnership between GeoPark and the Foundation of the playmaker of Colombia’s soccer team, James Rodriguez, seeks to make the most of free time, using soccer as a vehicle to promote the integral growth of the citizens of tomorrow.

Significant results were achieved in the first phase of the program, including:

To continue this learning and recreation program, GeoPark announced a second phase, which will begin on August. This second stage will further develop work with the children that make up James Rodríguez’s team in Tauramena and Villanueva, and support will continue to parents for them to become captains of high-performance families.

ABOUT GEOPARK
GeoPark is a leading independent Latin American oil and gas explorer, operator and consolidator with operations and growth platforms in Colombia, Peru, Argentina, Brazil, Chile and Ecuador. As part of its mission to “Create Value and Give Back,” the company develops sustainable social investment programs in conjunction with the State and local authorities and communities, which aim to promote positive changes in the areas in which it has activities. GeoPark is listed on the New York Stock Exchange (NYSE). In Colombia it started activities as an operator in 2012 and is now the second largest private oil operator in the country.