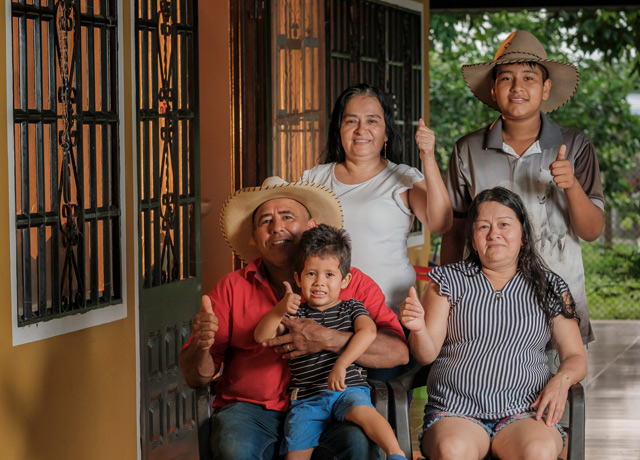 Bogota, Colombia. – For the second time, GeoPark’s Sustainable Housing program has won an award from the Colombian Government for its contribution to overcoming poverty. The award was presented at an event chaired by Housing, City and Territory Minister Susana Correa, and the Director of the Social Prosperity Department, Pierre García Jacquier, held to highlight the 24 most important public, private and international cooperation programs in overcoming poverty in Colombia.

GeoPark has implemented the program since 2013 in partnership with the Minuto de Dios Corporation to improve the housing conditions of neighboring families in Casanare and Putumayo departments. Within the program framework, improvements have been made to the homes of more than 1,500 families in the municipalities of Tauramena, Villanueva, Paz de Ariporo and Pore in Casanare and, more recently, in the municipality of Puerto Asis in Putumayo. Activities have allowed homes to improve different indicators of the Multidimensional Poverty Index by up to 94%.

“When we started work in Colombia, we set ourselves the goal of contributing to the development of the country and building a legacy of prosperity in the territories we operate in. Our Sustainable Housing program is in line with this, allowing us to be part of developing projects that impact the lives of our neighboring communities and contribute to the achievement of the Sustainable Development Goals by facilitating access to adequate, safe and affordable housing and services,” GeoPark Nature and Neighbors Director Norma Sánchez said on receiving the award.

GeoPark thanks the Social Prosperity Department for this distinction that recognizes the effort of public and private organizations for their contribution to the sustainable development of regions in Colombia, and congratulates all the initiatives that also won awards for their determined contribution to overcoming poverty.

With the award, GeoPark reaffirms its commitment to continue contributing to the development of the country through high-impact projects that result in a better quality of life for its beneficiaries and that continue to contribute to the achievement of the Sustainable Development Goals.

GeoPark is a leading Latin American oil and gas exploration and production company with assets in Colombia, Ecuador, Chile, Brazil and Argentina, and which has been listed on the New York Stock Exchange since 2014. It is the second largest oil producer in Colombia with almost 8% of the country’s total production. Since its foundation GeoPark has had an Integrated Values System called SPEED, which summarizes the Company’s commitment in five critical areas: Safety, Prosperity, Employees, Environment and Community Development. SPEED has been key for GeoPark in attracting the best talent, being the preferred partner and the best neighbor, and developing a successful, safe and sustainable operation.