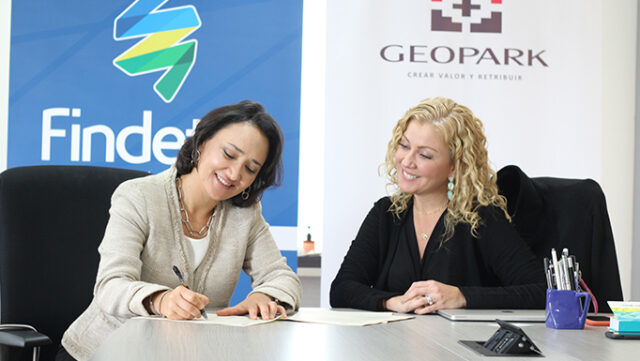 Yopal, Casanare – With the aim of identifying productive models with the potential to boost the economy of municipalities of influence of Llanos 34, a block located in Villanueva and Tauramena municipalities, GeoPark has signed a partnership with national territorial development bank Findeter.

In the act presenting the agreement to representatives of the Government of Casanare and delegates of the local administrations of Tauramena and Villanueva, GeoPark’s Social Responsibility Manager Luisa Vargas said “Working on the design of the navigation chart that will guide the regional development of the municipalities where we have been operating since 2012 is the way to reward Casanare. Economic diversification is key to guaranteeing the well-being of our neighbors, and that is the legacy that we are building in this region.” The presentation of the new GeoPark-Findeter partnership took place at the headquarters of the Casanare Chamber of Commerce in Yopal.

The project is part of Findeter’s ‘Land of Opportunities’ initiative, which is being implemented in other areas of the country, including the cities of Monteria and Santa Marta. In the case of Casanare, the objective is to provide the municipalities in the south of the department with a strategy that identifies opportunities for regional development based on the productive vocation of the region.

During the next 12 months, a multidisciplinary team from Findeter will work together with actors from the public and economic life of the two municipalities, to:

Based on the inputs obtained, a plan will be designed for the productive and economic development of the municipalities, which will be put to the consideration of communities and authorities.

Findeter is Colombia’s development bank and is linked to the Ministry of Finance and Public Credit. It supports sustainable progress through the financing of infrastructure projects that generate well-being and improve people’s quality of life.

ABOUT GEOPARK
GeoPark is a leading independent Latin American oil and gas explorer, operator and consolidator with operations and growth platforms in Colombia, Peru, Argentina, Brazil, Chile and Ecuador. As part of its mission to “Create Value and Give Back,” the company develops sustainable social investment programs in conjunction with the State and local authorities and communities, which aim to promote positive changes in the areas in which it has activities. GeoPark is listed on the New York Stock Exchange (NYSE). In Colombia it started activities as an operator in 2012 and is now the second largest private oil operator in the country.