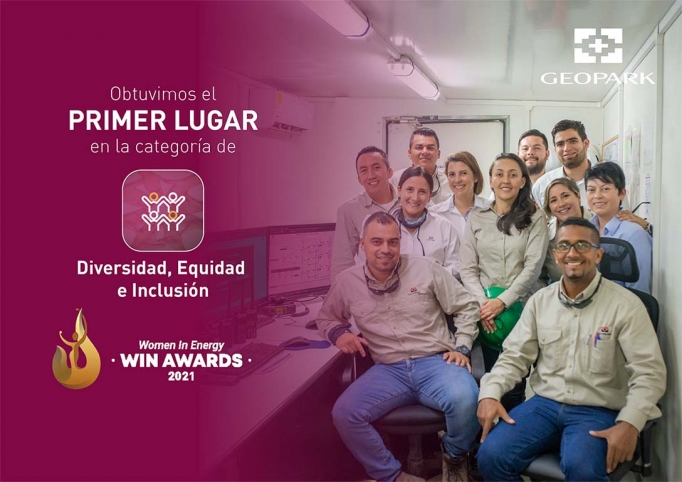 Bogota, Colombia. GeoPark proudly won first place in the Diversity, Equity and Inclusion category in the fourth edition of the WIN Awards, held by the Colombian chapter of the Society of Petroleum Engineers (SPE). Eleven other companies had been nominated.

The WIN Awards were created in 2018 to recognize the individual contributions of women in the development and success of the oil and gas sector, as well as highlighting companies whose best practices stand out in the areas of Diversity, Equity and Inclusion; Sustainability; and Energy Transition.

“I am honored to receive this prize because it confirms that we are on the right path to closing gender gaps and strengthening diversity as a powerful tool to go ever further,” GeoPark Capacities and Culture Director Agustina Wisky said on receiving the prize during the virtual award ceremony.

Since it was founded nearly 20 years ago, GeoPark established a formula for success that consisted of having the best work team. This has led to a highly diverse workforce and a percentage of women well above the global industry average. Women represent 42% of the management team, the board is chaired by Sylvia Escovar, 34% of staff are women, and 43% of new hires in 2020 were women.

To align gender equality management with world-class practices, GeoPark has reported its gender equity metrics under the Bloomberg Gender-Equality Index methodology since 2020. In 2021 it won the Equipares Silver Award after creating a Gender Equality Management System, which is part of the Company’s Commitment to Equality, Inclusion and Diversity [insertar link en inglés].

Additionally, since 2017 GeoPark has run a program of university scholarships for women in science and engineering. Thirteen young women from areas neighboring the Company’s operations in Colombia, Chile and Argentina are currently studying science and technology courses at top-level universities.

GeoPark will keep its commitment to adopting best practices to continue building a more inclusive and diverse workforce and society.

GeoPark is a leading Latin American oil and gas exploration and production company with assets in Colombia, Ecuador, Chile, Brazil and Argentina that since 2014 has been listed on the New York Stock Exchange. It is the second-largest oil producer in Colombia with almost 8% of total production in the country. Since its foundation, GeoPark has had an Integrated Values System called SPEED, which encapsulates the Company’s commitment in five critical areas: Safety, Prosperity, Employees, Environment and Community Development. SPEED has been GeoPark’s key to attracting the best talent, being the partner of choice, the best neighbor and developing a successful, safe and sustainable operation.