Intranet
With support from GeoPark, the Air Patrol brought medical care to more than 700 villanuevenses - GeoPark
Go Back
Media Room >

With support from GeoPark, the Air Patrol brought medical care to more than 700 villanuevenses 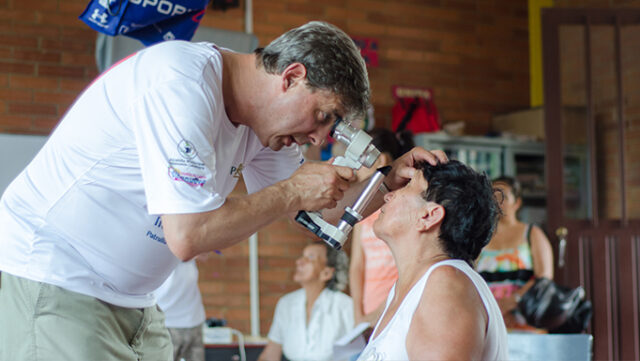 197 chirurgical procedures were carried out in less than 48 hours, which is a record for the Brigade in the Civil Air Patrol.

Villanueva, Casanare – Committed to creating value and giving back, GeoPark has supported, in a second consecutive year, the medical-chirurgical Brigade of the Colombian Civil Air Patrol in Villanueva, Casanare which offered high-level medical assistance to the most vulnerable villages of the area.

Led by more than 40 health professionals and 13 pilots, approximately 700 inhabitants of the rural and urban area of Villanueva, could have access to medical services such as general surgery, gynecology, ophthalmology, optometry, pediatrics and echography.

After one week of work in the initial patients assessment and two days with the Brigade, Enrique Martín, Operations Director of the Colombian Air Patrol said “It is very pleasant for us, Air Patrol, to come back to Casanare, to adapt the hospital so that patients from different parts in Villanueva can come, to bring health professionals who donate their time to change lives and, of course, to have all the support of the municipality and organizations such as GeoPark, making it possible for us to be where we are needed the most”.

GeoPark support was allocated to medical equipment, medicines and necessary elements for the Brigade to fully operate as well as accommodation and food for medical doctors and volunteers who made up this program, and entertainment for patients who assisted.

In this regard, Norma Sanchez, Social Manager at GeoPark, has commented: “Supporting these type of initiatives aimed at improving the wellbeing of our neighbors, reinforce our belief and long-term commitment of creating value and giving back. During this 2018, we will keep focusing on health as primary priority for the sustained and complete development of our community”.

The Colombian Civil Air Patrol is a private non-profit organization with 50 years of experience in medical, chirurgical, humanitarian and emergency assistance; it assists more than 12,000 people per year and provides them free medical or chirurgical treatment to overcome health issues.

GeoPark is a leading independent Latin American oil and gas explorer, operator and consolidator with operations and growth platforms in Chile, Colombia, Brazil, Peru and Argentina. It is the first private oil and gas producer in Chile and is listed at the New York Stock Exchange. In Colombia, it starts its activities as operator in 2012, in 4 blocks located in Casanare department, in the municipalities of Paz de Ariporo, Pore, Tauramena and Villanueva. GeoPark Colombia operates in the Llanos and Magdalena basins; it is a direct operator of La Cuerva, Llanos 34, Yamú and VIM-3 blocks; it also has working interests Llanos 32, Llanos 17, Abanico and Jagüeyes blocks.