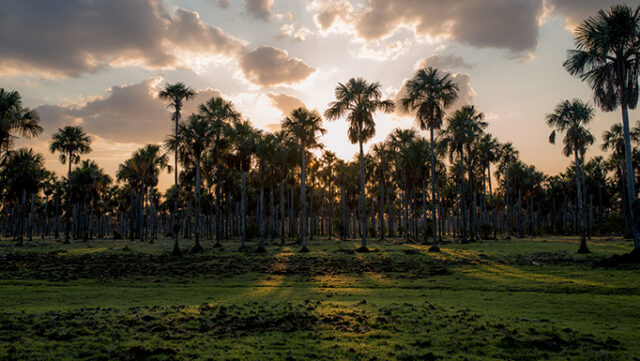 With the donation, the La Esmeralda Nature Reserve becomes an environmental heritage of the Casanareño people of Colombia. The event was celebrated with a photo exhibit.

Yopal, Colombia – GeoPark, a leading company in Latin America, gave the Paz de Ariporo municipality a 1,968-hectare property that is part of the National System of Protected Areas. The ceremony for the handover of the site — the La Esmeralda Nature Reserve — was overseen by Flavio Vega, mayor of the municipality in the Colombian department of Casanare. Representatives of environmental institutions, trade unions and NGOs attended the event. The nature reserve is listed as a perpetual conservation area because of its unique flora and fauna.

The donation of La Esmeralda, as the reserve is called, is part of the company’s fulfillment of investing no less than 1% as established by Law 99 of 1993 in relation to the La Cuerva hydrocarbon block in Paz de Ariporo. The donation was made possible thanks to the collaboration of the National Environmental Licensing Authority (ANLA) and the Regional Autonomous Corporation of Orinoquia (Corporinoquia), which worked with GeoPark to identify a site with a high-value ecosystem that would contribute to the environmental heritage of the department.

“We want to thank Casanare and its institutions for the opportunity they gave us to hand over a reserve of high environmental value as part of the legacy that we are building in the department” said Diego Restrepo, GeoPark’s environmental manager. “We hope that La Esmeralda will become a symbol of the conservation of unique ecosystems in the country and the world”.

A STRATEGY FOR ENVIRONMENTAL CONSERVATION

Since launching its operations in Colombia, GeoPark has taken steps to comply with the obligations of the environmental licenses of its hydrocarbon exploration and production contracts, helping to benefit the environment.

In Casanare, GeoPark identified the Natural Reserves of Civil Society — protected areas dedicated to the conservation of samples of natural ecosystems — as strategic areas for the preservation of habitats that are home to the region’s distinctive flora and fauna, including the moriche palm, the walking palm, and the chigüiro, the largest living rodent in the world that is also called the capybara and carpincho.

A PORTRAIT OF NATURAL WEALTH

At the event, an exhibit by Brian Moreno, a photographer from the town of Tauramena, Casanare, paid tribute to the environmental wealth of La Esmeralda with photos that expose the beauty of the region’s species and landscapes.

You can download some of the sample images here.

ABOUT GEOPARK
GeoPark is a leading independent company in the exploration, operation and consolidation of hydrocarbon assets in Latin America, with platforms for growth in Colombia, Peru, Argentina, Brazil, Chile and Ecuador. Under its “create value and give back” mission, the company promotes sustainable social investment programs in coordination with both state and local authorities and communities with the goal of promoting favorable changes in the environments where it operates. GeoPark is listed on the New York Stock Exchange (NYSE). In Colombia, it began operations in 2012 and today it is the second largest private oil producer in the country.